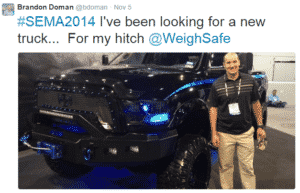 The annual SEMA (Specialty Equipment Manufacturers Association) show is a week-long Christmas for automotive innovators, dealers, and buyers. This year was no exception with over 2,000 new products, 2,300 exhibitors and an estimated crowd of 130,000 filling over a million square feet of the Las Vegas Convention Center.  You could not leave without buying yourself an early present.

Even if you stayed the whole week it would have been nearly impossible to check out all the booths. SEMA had everything from drag racers to a 3D-printed car. But you might be disappointed if you did not have the chance to stop by Weigh Safe, winner of Best New Tools and Equipment last year.  The new, improved hitch had auto parts and accessories store owners eager to get it on the shelves. Weigh Safe could revolutionize the trailer hitch industry with its built-in scale that measures tongue weight.

LEAP Innovations, the Utah-based manufacturer of Weigh Safe, signed up national dealers stretching as far as New York and Florida. That’s about as distant from Utah as you can get in the continental United States. But owners in Australia have also expressed interest.

During SEMA week, Weigh Safe Twitter followers doubled. We are still in the hundreds but remember we’re a hitch, not Beyoncé. And she has been to Vegas a few more times than us.

We use cookies on our website to give you the most relevant experience by remembering your preferences and repeat visits. By clicking “Accept”, you consent to the use of ALL the cookies.
Do not sell my personal information.
Cookie SettingsAccept
Manage consent

This website uses cookies to improve your experience while you navigate through the website. Out of these, the cookies that are categorized as necessary are stored on your browser as they are essential for the working of basic functionalities of the website. We also use third-party cookies that help us analyze and understand how you use this website. These cookies will be stored in your browser only with your consent. You also have the option to opt-out of these cookies. But opting out of some of these cookies may affect your browsing experience.
Necessary Always Enabled
Necessary cookies are absolutely essential for the website to function properly. These cookies ensure basic functionalities and security features of the website, anonymously.
Functional
Functional cookies help to perform certain functionalities like sharing the content of the website on social media platforms, collect feedbacks, and other third-party features.
Performance
Performance cookies are used to understand and analyze the key performance indexes of the website which helps in delivering a better user experience for the visitors.
Analytics
Analytical cookies are used to understand how visitors interact with the website. These cookies help provide information on metrics the number of visitors, bounce rate, traffic source, etc.
Advertisement
Advertisement cookies are used to provide visitors with relevant ads and marketing campaigns. These cookies track visitors across websites and collect information to provide customized ads.
Others
Other uncategorized cookies are those that are being analyzed and have not been classified into a category as yet.
SAVE & ACCEPT